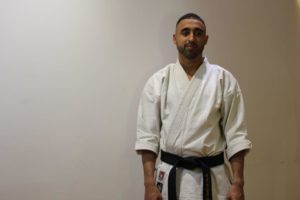 Sensei Aamar first started training at the age of 11 in Karate-do Goju Kai under Sensei Gurmit Singh for 9 years, though he had taken a gap of 3 years within that time of training due to losing his Mother to cancer at the age of 15.

Whilst on this unexpected gap from his Karate journey, Sensei Aamar found himself drawn towards the art of Boxing at the age of 15 which saw him entering 2 amateur contests where he obtained the record of 2 wins no loses.

At the age of 17 Sensei Aamar returned to where he had left off training with Sensei Gurmit Singh. After receiving his 1st Dan Black Belt (2012) he then established the current Slough Dojo at the age of 19. After his instructor Gurmit Singh decided to step away from Karate, Sensei Aamar then discovered Sensei George Andrews and his teachings of Goju Ryu in 2013 and has since been training and teaching the style of Karate-Do Goju Ryu. Sensei Aamar successfully passed his 2nd Dan in 2016 and 3rd Dan in 2019.

Sensei Aamar’s reason for opening the dojo has always been for the passion of teaching the art of Karate as well as knowing through the tough times in life, his commitment to training had kept him on the right path during hardships in his younger days – hoping his teaching of Karate-Do can also help the younger generations in keeping out of trouble along with adapting to a healthier lifestyle.

In Sensei Aamar’s own words he says “I teach Karate-Do Goju Ryu so it can give others the gift I have been so blessed with. Not only do I feel safe when I am out with family and friends at any time of the day and in any area but I also feel a sense of security when being abroad amongst unfamiliar surroundings. My aim is to teach others the importance of self-defence and healthy living. I also want to be a positive role model for the younger generations to look up to for motivation and success as well as ensuring they become people who will bring positivity into their communities.”