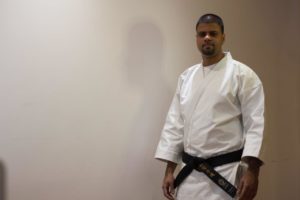 Sensei Arun first started training at the age of 8 years old under Sensei Harvinder Sagoo in the style of Shotokan Karate.

Staying only a short while with Sensei Harvinder he then changed path and began training at a local dojo in Southall under Sensei Gurmit Singh in Goju Kai Karate.

Over the many years of hard training and determination Sensei Arun successfully passed to Shodan-Ho (Black Belt) in 2006. Shortly after he was graded for his Shodan (1st Dan Black Belt) and passed in 2010.

Teaching and coaching over the years has allowed Sensei Arun to further increase his knowledge and passion in the art of Goju Kai Karate as well as being able to help students grow in confidence and further expand their abilities in Martial Arts.