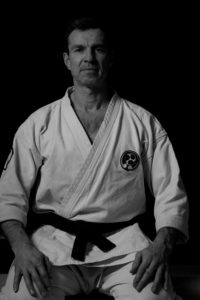 Sensei Glenn started his journey into martial arts practising Goju Ryu at a club in Canvey Island at the age of 9. It was there where he picked up all the basics of the first Goju Ryu katas and stood in lines repeating the basic moves over and over again, he loved spending time doing this repetition training as he knew this is the way he will perfect the movements and form. Sensei Glenn was very active at this age and also enjoyed other sports such as football and badminton and he felt his Karate helped him grow in every other sport he undertook.

Whilst doing A-levels Sensei Gavin was out of training due to studying and having to travel to college as well as playing football for Essex and training at Southend United for their youth team. If it wasn’t the studies or the football keeping Sensei Gavin away from training Karate then it was the injuries he was picking up along the way.

The time had now come for Sensei Glenn to go embark onto the journey of going to university. This is the same time Sensei Glenn reflects he felt Karate really enter into his DNA, when out on the first week of University and during freshers week he chanced upon a leaflet to a Goju Ryu club run for students. Here he met Sensei Gavin Mullholland whom he restarted his training under. During this period he was able to explore Goju in a much deeper way drawing on Sensei Gavin’s knowledge as he trained within Goju but studied many other styles and influences of Sensei Gavin from other schools. Sensei Gavin has always trained focusing on how Goju should be used in combat. Training was always meaningful, hard and developed spirit. It focused on how the Kata and the Bunkai developed true self defence in a modern world. During this time Sensei Gavin also trained with Sensei Steve Morris. It was during this period that Sensei Glenn really felt he learned about the Science and mechanics of why the traditional Goju techniques actually developed power and showed what forces the body could project within the traditional moves. Understanding how to exploit human physiology in this way added yet another fascinating layer of knowledge to Goju Ryu. Under Sensei Gavin he attained his black belt Shodan-Ho.

In the next step of Sensei Glenn’s journey he had finally moved away to Oxford and only managed to train periodically at various clubs but never found a club where he could train as deeply as he did with Sensei Gavin. It was at this time training under Sensei Gavin he found calmness and evolved mentally to realise there was a responsibility not to harm anyone using the techniques that were now engrained in him. Sensei Glenn had continued to practice karate alone and did the traditional warm ups, stretching, meditation and the basics but never thought to go back to a club due to other commitments in life.

In Sensei Glenn’s own words he says “The skills I learnt from Karate never stopped me applying the physical techniques and power generation to every other sport I still play today. It also gave me the mental fortitude to look at resolving issues that can occur in everyday life. I feel the training also helped enhance my abilities to focus on the goals I want to achieve in life thus aiding me in the profession of being a teacher at secondary schools.”

Sensei Glenn’s whole world changed when he became a father in 2011 whilst living in Cambridge and with this there came a desire to want start training at a club again so he could train with his son and share what he had learnt and valued so much. He didn’t want to watch his son’s journey in Karate rather he wanted to walk side by side at the start of his (hopefully) long journey in Karate. This reawakened his search for a club to train at and he found a Goju club in Cambridge and trained under Sensei Martin Stockley who is under Sensei George’s umbrella of instructors. Just as this was taking him back onto his traditional path of training he moved from Cambridgeshire to Buckinghamshire and was losing his connection with the world of Karate once again. However this is where Sensei Glenn was able to find his first club in Reading with links to Sensei George.

Shortly after this Sensei Glenn came across the class ran in Slough by Sensei Aamar and the other instructors who teach various of ages starting from 5 years old and ranging to 60 years old and divide these into 3 sessions giving every age group the concentrated learning they need and deserve. Sensei Glenn finally feels his training is back to where he wants and can see a new road to travel and adapt to by teaching/coaching the next generations of Karate students which include his son and training with the adults and advanced students in the third session.